The SHEROES Foundation is a nonprofit organization working to end gender inequality in all facets of life in Africa and focuses on economic and political empowerment to achieving the SDGs aim of gender equality. 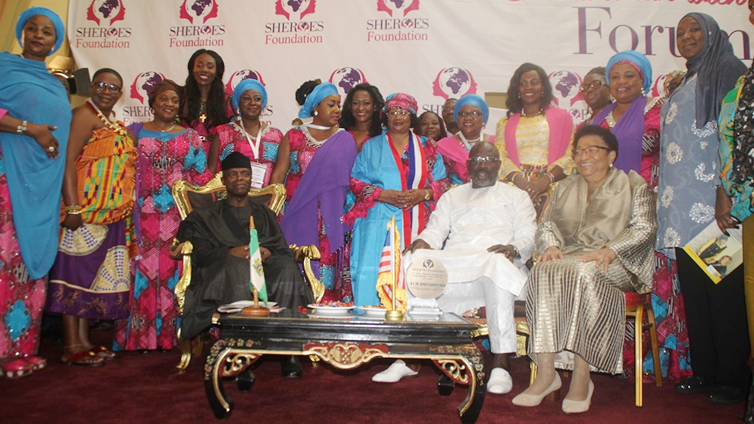 President Weah declared himself a feminist and pledged to champion the cause of women of Liberia throughout his presidency.

“...Ladies and Gentlemen, I wish to declare myself as “Liberia’s Feminist-in-Chief”, and hereby pledge to the women of Liberia that I will do all that I can, during my tenure as President of this country, to fight for gender equality and empowerment,” he declared.

The President recounted that Liberia was the first to do away with the stereotype that only men could head an African government when in 2005 the nation elected the continent’s first female president, Ellen Johnson Sirleaf, noting that “We continue to take pride in the establishment of this historical precedent.”

The President, speaking further called for affirmative action to be taken to foster greater inclusiveness of women in national leadership; emphasizing that numerous studies and research have proven that there is a definite correlation between women empowerment and sustainable economic development.

He boosted that handpicking a woman as his vice running mate, the appointment of a woman Deputy Chief of Staff of the Armed Forces of Liberia, and a Deputy Inspector General of the National Police, coupled with the appointment of many women to Ministerial positions and to boards of State-owned Enterprises are clear manifestations of his “strong desire and advocacy for gender equality and of increasing women’s participation in governance in Liberia.”

Serving as the keynote speaker, the former President of Malawi and Chairperson of the SHEROES Foundation, Dr. Joyce Banda called on African leaders to implement policies and programs that will promote women development in leadership.

She named limited financial capacity, lack of training and negative media campaign as some of the barriers that women politicians encounter. She however stressed that despite these challenges, women still struggle for their voice to be heard on the continent.

Banda, who ran for president and was defeated during her country’s last controversial election, announced that she will be running again for the presidency.

Also Speaking, Liberia's Vice President, Jewel Howard Taylor who is serving as the host called for a collective effort in advancing women thanked the guests for attending converging in Monrovia for the forum.

Also speaking, the first Chief Executive Officer of LoneStar Cell MTN, Uche Ofodile noted that MTN was proud to be one of the sponsors and pledged her company’s commitments in helping SHEROES promote women’s empowerment.

“We are walking the ball and we take these conversations seriously and we will work towards a set of actions to ensure that more women have a seat at the table,” she averred.

The international forum brings women together to celebrate achievement and discuss the opportunities and challenges they face while trying to get into leadership.

The first day of the SHEROES Forum focused on the journey of female visionaries and Pioneers in leadership, women who broke through the political “Glass Ceiling” and why female representation in political leadership in Africa is reducing. Discussions will also highlight the supportive roles men have played in promoting a safe space for girls and women to achieve their highest potentials.

Day two will also highlight the future of women’s political leadership in Africa, what women can do to increase the number of women in leadership and how they negotiated culture, religion and tradition to get to the top.

The discussion will extend to the role of women in the private sector, via entrepreneurship and examine opportunities and challenges for female executives. The day will climax with the launch of the Jewel Starfish Foundation and Dinner that evening.

The third and final day of the conference will examine the balance that women in leadership strive to achieve between professional and family life and sharing about health and wellness. There will also be a session on being “My Sister’s Keeper” and how women can get involved and vested in helping each other.