Vice President, Prof. Yemi Osinbajo, has identified illiteracy as one of the major factors hindering African girls from achieving their full potential. 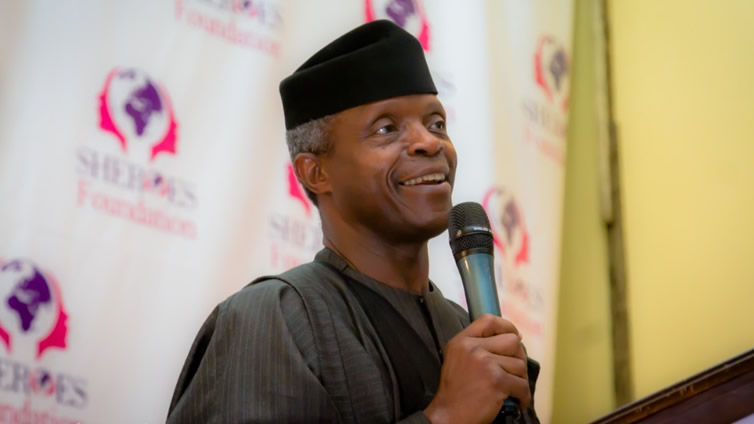 Laolu Akande, Senior Special Assistant to the President on Media and Publicity, Office of the Vice President, in a statement on Thursday in Abuja, said Osinbajo spoke at the inauguration of International Sheroes Foundation on Wednesday in Monrovia, Liberia.

The International Sheroes Forum is aimed at bringing new perspectives to key issues facing women around the world and particularly in Africa.

Osinbajo said he was deeply honoured to have been invited to be a part of the first Sheroes Forum in Liberia.

He said that it was appropriate that Sheroes should be celebrated in Liberia as the nation that had the distinction of producing Africa’s first elected female President, Ellen Johnson Sirleaf.

Osinbajo said that it was worthy to add for good measure that Sirleaf was also the first African woman to be elected twice as President of her country, even Africa awaited the second coming of President Joyce Banda of Malawi.

He said: “Our daughters are educated or being educated and can and will compete favourably with their male counterparts anywhere. They will aspire and can attain political leadership.

“This is by virtue of the privileges of the circumstances of their birth; they are positioned to break the glass ceilings in commerce, the professions and politics.

“Over 40 per cent of girls in Africa on the average are illiterate; illiteracy means that they will not find decent, well-paying jobs.

“They will in many cases, would be married off early, and have children while they themselves are still children.

“Many would be discriminated against in inheritance rights, or punitive widowhood practices; they would work the hardest on the farms, and long hours in the markets but would earn far less than men.’’

He said the historical deficits ensured that women would be underrepresented in leadership at all levels.

According to him, something has changed in the past few years as women are now saying that the fight for gender equality is not one for women and girls alone.

He said: “It is also a fight for all fair-minded and just men who believe that men and women must have equal rights.’’

He said that Men were being challenged to stand shoulder to shoulder with women in the struggle for gender equality.

Osinbajo said that women were learning that insisting on equal rights for women was not a favour being done to women but an imperative of justice and fairness, an entitlement, a debt owed to women and girls, not a gift.

He said: “This is perhaps in my views, one of the greatest leaps of development in contemporary history.

“When boys and girls today do not take gender equality for granted.

“When women and girls are free to reach their full potentials, to get education and earn equal pay for equal work, to aspire and attain the highest political positions not once in a while, but all the time, then the full potential of the other half of the population of the world will be unleashed.

“The implications of such a development, for a vastly improved quality of life for all of us, can only be imagined.

“It is this ideal that has informed the great work that the Sheroes Foundation has been doing and for which they deserve our commendations.’’

The vice president added that African men were coming to the realisation that gender equality was a collective interest.