(CNN)Hillary Clinton clinched the Democratic presidential nomination, according to CNN's delegate and superdelegate count, and will become the first woman in the 240-year history of the United States to lead the presidential ticket of a major political party. 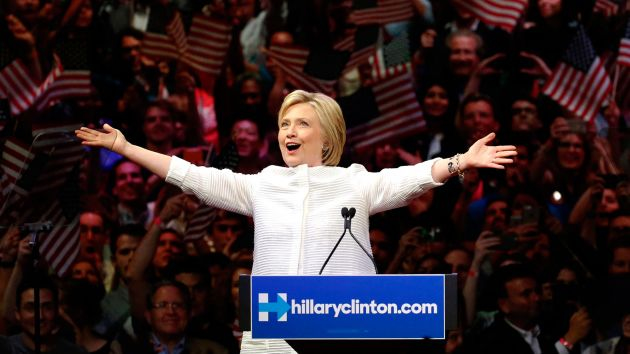 A strong showing in Puerto Rico's Democratic primary on Sunday and additional support from superdelegates put Clinton, 68, over the top on Monday night to become the presumptive nominee. She has secured 1,812 pledged delegates and 572 superdelegates for a total of 2,384 delegates -- one more than needed for the nomination.

Clinton's delegate count will grow Tuesday when six states, including delegate-rich California and New Jersey, hold contests. Speaking in Long Beach, California, on Monday, Clinton said she was still focused on the states where voters head to the polls Tuesday.

"We are on the brink of a historic, historic unprecedented moment but we still have work to do, don't we?" she said. "We have six elections tomorrow and are going to fight hard for every single vote, especially right here in California".

After three decades at the center of American politics as a pioneering -- and deeply controversial -- feminist icon, the victory brings Clinton within reach of finally cracking the "highest, hardest glass ceiling" she lamented eight years ago when she conceded the Democratic race to Barack Obama. The former first lady, senator from New York and secretary of state will officially become the Democratic nominee at next month's convention and will face presumptive Republican nominee Donald Trump in a general election battle that is already shaping up as one of the nastiest campaigns in modern U.S. history.

Clinton has pounced on Trump's business record, character and tendency to use his platform to wage personal grudge matches to try to define him early on in the minds of voters as unfit for the presidency. Trump, for his part, is aiming to portray Clinton as a consistent liar who can't be trusted.

Clinton on Trump: No one will be spared from his insults

Though Clinton already has Trump in her sights, she has work to do in her own party, and has pledged to unite Democrats after a grueling nominating battle against Vermont Sen. Bernie Sanders. The self-declared democratic socialist confounded expectations that he was little more than a fringe candidate and mounted his own crusade against the political establishment that electrified the party's progressive base. He goes into the final Super Tuesday contest of the campaign this week vowing to fight on until the convention in July, despite being mathematically eliminated from the race.

"It is unfortunate that the media, in a rush to judgment, are ignoring the Democratic National Committee's clear statement that it is wrong to count the votes of superdelegates before they actually vote at the convention this summer," Sanders campaign manager Michael Briggs said in a statement Monday. "Secretary Clinton does not have and will not have the requisite number of pledged delegates to secure the nomination. She will be dependent on superdelegates who do not vote until July 25 and who can change their minds between now and then."

The CNN delegate tally is based on the pledged delegates apportioned after coast to coast nominating contests this year and a project spanning the entire campaign to canvas superdelegates -- party officials and lawmakers -- on how they will vote at the Democratic National Convention. Clinton will remain the presumptive nominee until the convention in Philadelphia next month.

Although Sanders is vowing to fight to try to get superdelegates to abandon Clinton, there are signs that the Democratic establishment is moving to shut the primary down after Tuesday in order to train its exclusive fire on Trump. Obama spoke to Sanders on Sunday, a Democratic source told CNN. And on Tuesday, House Democratic minority leader Nancy Pelosi endorsed Clinton on the day of her home state primary.

"I'm a voter in California and I have voted for Hillary Clinton for president of the United States and I'm proud to endorse her for that position. But I hasten to say that it's not over until it's over," Pelosi told ABC's "Good Morning America."

As for Obama's endorsement, White House spokesman Josh Earnest said Monday that he didn't have any announcements to make. Pressed by CNN's Michelle Kosinski whether Obama would indeed endorse someone on Wednesday, he answered: "I don't know. Maybe he will."

Earnest acknowledged Tuesday that media organizations, including CNN, have now called Clinton the presumptive nominee, but added that the most important "superdelegate" -- Obama -- is not prepared to make a public endorsement "at this point."

"However at this point there is at least one superdelegate. The one who works in the Oval Office who is not prepared to make a public declaration about his endorsement at this point. But stay tuned and we'll keep you updated," Earnest said at the White House briefing.

Earnest also shot down the possibility of a meeting with Obama and Clinton tomorrow while the President is in New York.

Politics has been entwined with Clinton's life since she was a precocious student who gave the commencement address to Wellesley College's class of 1969 and met the shaggy-haired young man who would become her future husband, the 42nd President of the United States, and lifelong political soulmate in the Yale Law library.
Back when she was a deeply polarizing political figure as first lady during the political wars of the 1990s, it would have seemed unthinkable that Clinton would eventually reinvent herself as the presidential nominee of her party.

But it's a mark of the hold the Clintons have maintained on the Democratic Party and their sheer political longevity that she will go to Philadelphia next month to accept the nomination at the Democratic National Convention.

Clinton enters the general election boasting one of the most impressive resumes of any recent presidential hopeful. She witnessed the late night pressures and the personal burdens of the presidency from a closer vantage point at the side of her husband, former President Bill Clinton, than any other previous nominee. She has also survived multiple political crises by drawing on almost supernatural resilience and is renowned for her mastery of policy.

Still, she has significant liabilities: Polls show that Clinton, like Trump, is one of the most unpopular presumptive nominees in history.

The scandal over the private email server she used as secretary of state has renewed questions over her transparency and honesty that have swirled throughout her public life. And Republicans believe her foreign policy record, tainted by her dealings with Libya and Russia while secretary of state, could turn into a huge opening for their candidate.

She must also unify a Democratic Party that has shown signs of a deep divide between the establishment and progressives, who helped Sanders surge to victory in dozens of states. Many Sanders supporters believe the party unfairly conspired against Sanders and stacked the deck in favor of Clinton.

Clinton's elevation to presumptive nominee status based on the declarations of superdelegates -- party officials who can vote however they choose at next month's convention -- and ahead of major contests in California and New Jersey Tuesday could only intensify that anger.

Sanders blasted the superdelegate process Sunday on CNN's "State of the Union" in an interview with Jake Tapper.

"My problem is that the process today has allowed Secretary Clinton to get the support of over 400 superdelegates before any other Democratic candidate was in the race," Sanders said. "It's like an anointment."

Clinton desperately needs a united Democratic showing in November, as she tries to lock in an electoral map currently favoring her party, and counter the surge of new Republican voters the Trump campaign insists that it will attract to the polls.

Her victory formally draws the battle lines for a deeply contentious November general election battle with Trump. Recent surveys of an angry, rebellious electorate, show the rivals locked in a tight race, after Clinton's initial wide early lead evaporated when the real estate billionaire gathered his party around him.

Nevertheless, Clinton, who is certain to add hundreds more delegates to her total in Tuesday's primaries, can savor her political comeback, after losing the 2008 Democratic primary to Obama. After serving as his first term secretary of state, she embarked yet again on the grueling presidential trail in January 2015 — following two years on the lucrative celebrity speakers circuit, piling up personal wealth that has emerged as a liability in a presidential campaign dominated by voter fury at political and financial elites.

Vowing to fight for an equitable economy and to keep Americans safe with her hawkish foreign policy instincts, Clinton noted at her announcement rally on Roosevelt Island, New York, that though she might not be the youngest candidate in the race she would be "youngest woman president in the history of the United States."

Like much in Clinton's life, the path to the nomination was strewn with obstacles -- and many of her challenges were self-inflicted, whether they related to her email server, her resistance to press scrutiny or her often criticized campaigning skills.

As she was in 2008, Clinton was viewed as the inevitable nominee -- but again faced an unexpected, grassroots challenge from her left, in the unlikely shape of Sanders, a septuagenarian self-declared Democratic socialist.

The opening nominating clashes in the snows of winter set the tone, from her wafer-thin victory in the Iowa caucuses to her humiliating defeat in the New Hampshire primary, for a tight, increasingly bitter nominating race.

She was able to clinch the nomination, however, on her strong performance in the Deep South and strength in big states like New York and Pennsylvania along with her advantage among superdelegates.